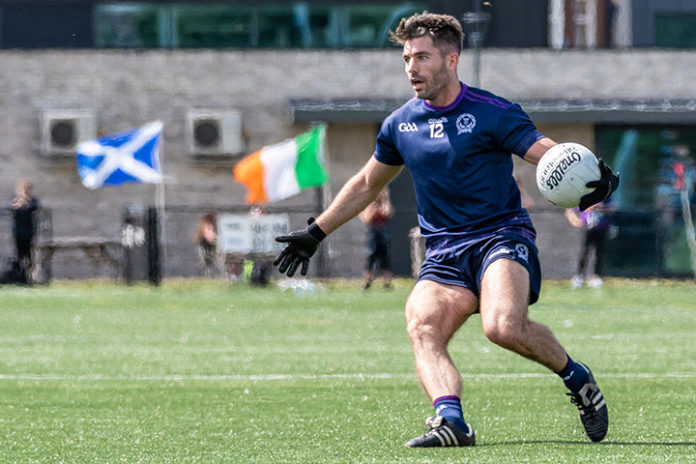 SCOTLAND GAA had two fine performances to celebrate as the county squad celebrated wins against Lancashire and London.

The victory over Lancashire came by a single point, with young Mark Doran—a product of the youth football system in Coatbridge—scoring what proved to be the decisive point after coming off the bench.

The journey back from England was a satisfying one for the Scotland squad, but it was made in the knowledge that London would soon be following them north of the border for what would be a testing encounter.

Their match at Clydebank was a rehearsal for the semi-final the two will now contest, and Scotland certainly had more to be happy about on this occasion.

Taking the lead in the match and driving the game in the familiar surroundings at Clydebank they were well on top for large periods and enjoyed long spells of possession which were finished regularly with a steady stream of scores that took them into the break leading 0-08 to 0-06.

Points by Hannafin, Slavin, Kinnevey, McAteer, Horan and O’Connor did the damage for Scotland, with Hannafin in particular doing great work to keep Scotland on top where it mattered.

London were a sticky opponent, however, and refused to go away, and in the second period they began to chip away at Scotland’s dominance. Despite this, Scotland extended their lead with scores from Elliot and Hannafin once again.

O’Connor, McCready and Dawson—a half-time substitute—all scored to put Scotland in sight of the finishing line with the scores at 0-12 to 0-08 in their favour.

A goal and a point for the visitors set the nerves jangling at the end though, with the final moments coming with honours equal at 0-12 to 1-09, only for Hannfin to pop up at the death with the vital score to put Scotland back into the lead and allow them to play out the final few seconds with something to defend.

At the whistle their slender advantage was enough, and the players could enjoy their victory as they prepare for their semi-final with London in York on Saturday July 10.