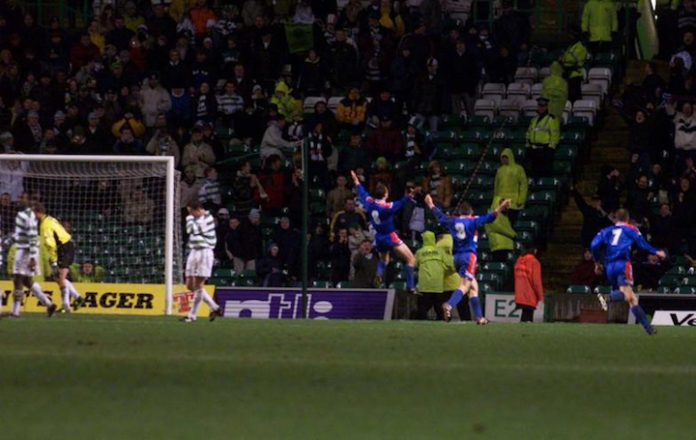 IN A season that promised so much—hopes of another domestic domination and with the champagne cooling on ice for the unprecedented ‘10-in-a-row’ parties—very little was harvested.

Across the city, Rangers have undoubtedly improved, but there is still a potent feeling that the majority of Celtic’s demise was brought on not by others, but primarily by themselves.

History, as we all know, often has a bemusing ability to repeat itself. Up until now, many supporters of the green-and-white will have looked back and shuddered at the ill-fated 1999-2000 campaign. Upon reflection, this recent campaign drew some uncanny resemblances to that particular season.

In the summer of 1999, the biggest pop acts were the likes of Travis, Stereophonics and Britney Spears. Robbie Williams had rocked Slane Castle at the tail end of the summer and his lyrical flow about stars directing our fate was a fairly constant feature on the radio airwaves back then.

Bill Clinton was still, the US president, albeit his tenure was not without controversy. People in Donegal were still using punts as their currency and, even in a world devoid of social media, the biggest fear was that on New Years’ Eve global computer systems would fail and planes would fall from the sky. Honestly!

In Glasgow, Rangers were fresh off the back of a domestic treble from the season before and Celtic pinned their hopes on a ‘Return of the King,’ with Kenny Dalglish coming back as General Manager with his mentee, and fellow-Liverpool legend, John Barnes taking the reins as Head Coach. It was a bold move to say the least, given Barnes’ inexperience as a coach.

From the outset, it seemed as though Celtic meant business. The club splashed out big money by bringing in Olivier Tebily, Eyal Berkovic, Stephane Bonnes, Rafael Scheidt, Bobby Petta, Dmitri Kharine and—the one saving grace among that lot—Stilyan Petrov.

On the field, at least at first, things looked promising. Celtic’s dynamic duo up front—Henrik Larsson and Mark Viduka—were firing on all cylinders. Going into the autumn, they won 11 of their opening 12 games, had made early headway in the League Cup and disposed of Hapoel Tel-Aviv in the Uefa Cup’s opening round.

Saturday, October 16, 1999, was a day where the fans were treated to a masterclass performance. A 7-0 showpiece victory over Aberdeen—with both strikers netting a hat-trick apiece—provided genuine optimism for the season ahead.  The fact that Barnes was something of a novice at this level seemed immaterial. For the time being at least. The fans who left Celtic Park that mild and somewhat sunny afternoon were not to know that it was all about to emphatically unravel.

Downward spiral
A few days later, Celtic would lose their talismanic dreadlocked striker for the rest of the season following Larsson’s catastrophic leg break away to Lyon. In his absence, Barnes resorted to his contacts book and rushed in an aging Ian Wright on a loan spell from West Ham. Initially, he seemed a fairly suitable stop-gap but that too would prove to be a false dawn.

Into November and Lyon compounded Celtic’s misery with a comfortable victory in Glasgow. The absence of Larsson was starting to show and one team that were never likely to show them any mercy for their predicament lay in waiting.

On a grey and overcast Sunday afternoon at Ibrox where they briefly snuck into a 2-1 lead, Celtic capitulated in first-half stoppage time. Rangers winning a dubious penalty was bad enough, but when captain Paul Lambert didn’t get up after his tackle on Jorg Albertz, it soon emerged that he’d been severely concussed, lost some teeth and was in need of urgent medical attention. Albertz’ knee had collided with Lambert’s mouth as he went to ground. While the German was able to dust himself from the challenge and score the equalising penalty on the brink of the interval, his opponent was still being ushered away by a team of paramedics. Rangers went on to acquire a comfortable and fairly telling 4-3 victory.

With the new millennium having passed without a hitch and no planes falling from the sky, Celtic’s season, in its own way, nose-dived and crash-landed in early February. A 2-0 lead at home to Hearts looked like plain sailing until a monumental cave-in ensued and the Jambos silenced Parkhead by turning the game on its head and running out 3-2 winners. Worse was to follow.

The following Tuesday night was the final straw. The Scottish Cup had offered a lifeline for Celtic to salvage something from this fire-wreck of a season, but when lower-division Inverness Caledonian-Thistle dumped them out of the cup in a humiliating 3-1 defeat in front of a sparsely attended crowd (above), enough was enough.

Rumours began to circulate that Mark Viduka had refused to go out for the second-half amid a tumultuous and angry dressing room. They proved to be true. Mass protests gathered outside the ground and chants of ‘Barnes Must Go!’ rang out long into the night. The Celtic Board responded with a prompt termination of his contract, but it didn’t end there. Kenny Dalglish, perhaps feeling responsible for all that had gone on, took over as interim manager.

A March Glasgow derby clash, under the Parkhead lights with Rangers, was the last chance to restore some small degree of pride. In a typically frantic and bad-tempered game, Rangers won it with an 86th minute bundler by Rod Wallace. A goal iconically remembered for the ball boy, behind the goal, kicking out at the ball in frustration. He was allegedly reprimanded, but who could blame the fella?

A League Cup Final win at Hampden provided mere consolation but, from a PR perspective, Dalglish’s renowned distrust of the press took a new road. He, rather oddly, ordered that a press conference be held at Bairds Bar—a regular Gallowgate watering-hole for Hoops fans—and while all this circus was all going on, there was hope that Larsson (and Lambert) would soon return to the fray and settle things .

Mark Viduka would officially pack his bags and depart, under a bit of a cloud, joining Leeds United for £7 million. Quipping to the media that he only had to play to 70 per cent of his ability to get into the Celtic starting team to the media as a nasty parting shot. Ian Wright would later remark that he detested living in Glasgow, although that was not a direct jibe at the club.

Similarities?
In comparison with this past season, one can perhaps notice the similarities that rose up. False promises, fallouts between players and management, injuries in key positions, fan protests, embarrassing cup defeats to lower-league opposition at home, a mid-season sacking leading to an interim role and a disastrous relationship with the media. It all seems oddly familiar, doesn’t it?

The one guiding light that stayed flickering for Celtic in May 2000 was that Larsson did reappear as a late substitute on the final day of the season. He even made it to the Sweden squad for the Euros that summer.

Back at base, Celtic looked to make amends by announcing Martin O’Neill as manager. And we all know how that turned out. So maybe, just maybe, hope does spring eternal.