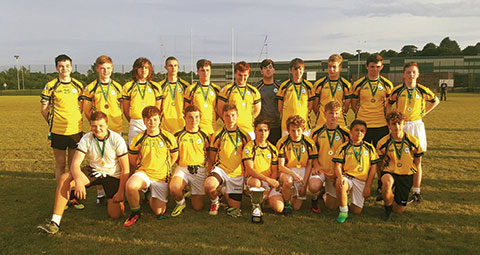 At stake was the Scotland U16 County Championship and both sides seemed well aware of what was on the line as they served up an epic encounter, which highlighted the depth of talent at that grade in Scotland.

With a strong wind adding to jangling nerves in the opening stages the match was scoreless for early part of the match, but by the time the players settled down they had grown accustomed to the conditions and the scores began to follow.

Davitts were having the better of things from distance, splitting the posts four times and tucking away a goal of their own, but with 2-02 on the board as the whistle signalled the end of the half it was Tír Conaill who were the happier of the two sides going in.

The wind continued to play havoc in the second period, with Harps in particular suffering as they watched an agonising nine wides miss their mark. At the other end Davitts were using the wind to their advantage, and a series of well-taken scores saw them begin to pull clear of the boys from Glasgow.

Harps thought they had managed to get back into the game as they approached the final ten minutes, but overcarrying before they dispatched the ball into the net saw play pulled back and the scoreboard unchanged.

Heartbreak followed for Harps as they saw Davitts charge up the field and palm the ball into the net after a well-worked piece of play, before a penalty was awarded and duly converted to put things beyond doubt.

The whistle blew with the scores at 4-09 to 2-06 in Davitts’ favour, and the celebrations (above) and commiserations followed as the players and managers reflected on a hard-fought match and great display of Gaelic football.