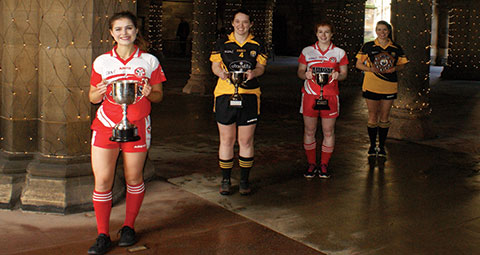 It’s clear that Gaelic Football is going from strength to strength in Scotland and as more and more students stay in Scotland during the summer, clubs are beginning to build close connections with these University teams.

Glasgow Gaels and Glasgow University (above) have had one such connection in the past number of years, with several key players coming out of the university set-up in both the men’s and women’s side. Both the 2015 and 2016 Junior Manager’s Player of the Year, Conal Gormley and Dan O’Hanlon respectively, were key to the Gaels Junior side’s double success in the League and Championship in 2016. In addition, former Glasgow Uni students, Chris Curran and Séamus Daly, among others, were key players in both 2015 and 2016 Senior Finals. Last year’s British Club Championship-winning captain Siobhan Reynolds togged out for Glasgow Uni in the 2015 season while completing her PGDE in primary teaching. In fact, 12 ladies players in the 2016 Gaels All-Ireland quarter- final panel were current or former students at Glasgow University. Three players in that panel were also students at Glasgow Caledonian University at the time.

As well driving a flow of players, the management side has also always been closely connected with Glasgow University, with Gaels ladies manager, Paul Gallagher, having managed the university side for a number of years. In the 2016/17 season, Gaels club member and men’s player Adrian Farrell has taken on the role, with Siobhan Reynolds and Annette Lloyd coming on board as assistant coaches. On the men’s side Gaels player’s Shane Moran, Dave McGovern in 2015/16, and JP Langan and Damian Kellegher in 2016/17 have taken up management of the men’s university team.

To learn more about the links between universities and Gaels—and the benefits clubs can feel from nurturing a close working relationship with universities at a time when Irish students continue to study in Scotland and stay on in the country for work—we hear from just a few of the dual-players as they answer some questions about their experiences playing for both university and club teams.

What’s most enjoyable about playing for Glasgow Uni?

“Meeting people when I joined the team in first year, especially those who were in the same boat as me and building friendships with the team that have lasted throughout university. Also the British Championship weekend is always a highlight!”

“Like any sport, its great to be part of a team and socialise with ladies we wouldn’t know otherwise because they are in different countries. It is also a bonus that Uni teams play in the off-season, so we can continue playing football all year round.”

Does anything stand out about playing for the Gaels?

“Being away from home and playing for the Gaels has allowed me to be part of community over here. We’ve all become good friends and its great to win matches and be successful with a great bunch of girls and two great coaches.”

“The people are a great bunch from the coaches to the kids who come along to training when sitters can’t be found. It’s a very welcoming environment and everyone is encouraged.”

How did you get involved with playing for the Gaels?

“I stayed in Glasgow over the summer a couple of years ago and wanted to continue playing football. I knew Paul from the Uni team so I decided to give it a go. I started because Paul mentioned pre-season circuits for the Gaels when Uni were preparing for British Championships, so I went along for the extra training. The rest is history!”

“They are two groups of people that make you feel at home. Both teams have a great atmosphere at training, which means we can have a bit of fun as well as working hard. The socials and nights out are always great craic too!

“The atmosphere is similar. People are very welcoming, no matter what your skill level. It’s very encouraging and supportive. We have county players and players who have never touch a football before, and both are equally welcomed.”

The Gaels have seen a surge in membership in recent years. To what do you attribute their success?

“It’s all about being part of the team. Going to all trainings and working hard as a team and helping each other improve. There’s been really good publicity and networking too.”

What advice would you give someone thinking of coming to Glasgow for Uni?

“It’s a great place. There are lots of opportunities to join different clubs and societies and meet plenty of new friends. Join a club or society. You can meet your best mates or even future flatmates!”