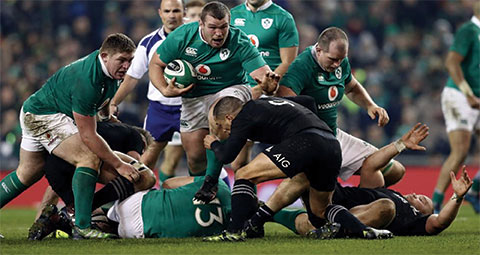 AS JANUARY turns to February the rugby fan’s mind turns to the Six Nations. And Irish fans will be looking forward with more glee than most.

After beating the All Blacks (above) and the Australians in the Autumn, the Boys in Green look as strong as they ever have, with a raft of new talent replacing departed legends such as Brian O’Driscoll and Paul O’Connell.

There are many reasons for optimism. The Irish provinces are in grand form, with Munster and Leinster back to their imperious best and looking likely to dominate the Pro 12 and go far in Europe. The Connacht fairytale continues as they look likely to reach the knockout stages of the Champions Cup along side their more established brethren.

With the provinces in rude health, the national side will believe they can halt the English juggernaut. The English are firm favourites to repeat their Grand Slam success of last year, with some overconfident Sassenachs already selling T-shirts that say ‘England—2017 Grand Slam Champions,’ which seems a touch premature. Especially as the last game of the championship sees them to travel to Dublin for what many are already billing as a championship decider.

But the Six Nations are rarely so straightforward. Any ideas of an English procession have also been dented by the fact that most of their first choice forwards may miss the tournament, or at least part of it, with injury.

Another factor may be that the tournament will also be the first to be contested with bonus points, with extras going to sides who score four or more tries or lose by seven points or fewer. This could hurt the English who traditionally play a more defensive game.

But if the English are wobbling, the Irish know they can take nothing for granted. Their first match is tricky trip to Murrayfield to face a resurgent Scottish side. The bookies make the Irish favourites, but at home, Scotland have the players to hurt Ireland in what is sure to be an enthralling encounter.

After that it’s off to Italy, who with new Irish coach Conor O’Shea are not the pushovers of old. Then they welcome their old bête noirs, the French, to the Aviva—an eternally punishing fixture—before facing the Welsh in Dublin.
It’s a tough run of matches and if the Irish, for all their good form, make it through in position to seize the title on the final day against England, by God they’ll have earned it.