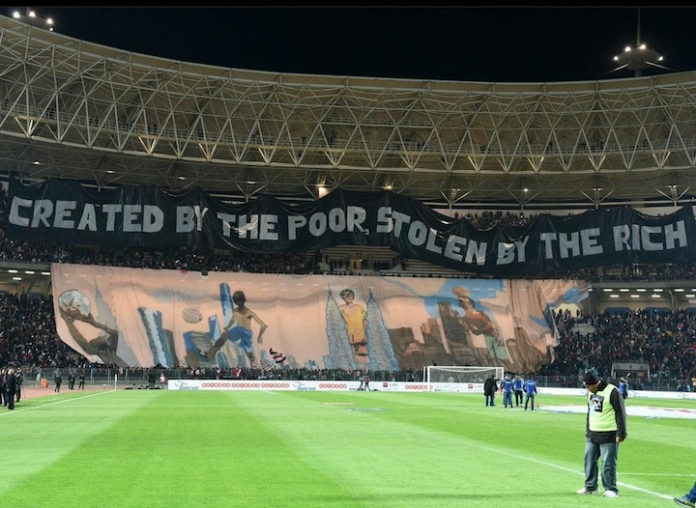 SUFFICE to say that Monday April 19, 2021, was a dark day in the history of football. As I was writing this article, my phone proved somewhat of a distraction as Twitter and Whatsapp updates constantly kept me informed about the possible imposition of a so-called ‘European Super League.’

Why did this have to happen to football of all things? The one bastion of normality left in a world that’s gone bonkers this past year with Covid-19 regulations, normal life becoming replaced by the ‘new normal’ and a never-ending list of basic things that we can no longer do. Granted, football did have some tiresome aspects of late—the ongoing saga with VAR being one of many—but that news will live long in the memory.

News filtered through on Sunday morning that the owners and presidents of the ‘elite clubs’ of England, Spain and Italy had all apparently signed some sort of Declaration of Intent. Part of the plans was to break away from their own associations and the Champions League tournament to play their own members-only—and highly—exclusive league.

This has generated an overwhelming sense of dismay among the hardcore supporters at many of these clubs. A banner protest took place outside Anfield and many unofficial blogs, video diaries and podcasts exploded onto the news feeds of phones and tablet devices.

Neville’s niggles
As always, the reaction of the media—both social and mainstream—has caught my eye. Following the Super Sunday match on Sky Sports, co-commentator and analyst, Gary Neville, was given centre stage to vent his utter disgust at the actions of the six English clubs in question. “Relegate them! Take their titles off them! This is disgusting!” was the basic gist. He then went on to promote the Monday Night Football broadcast between Leeds and Liverpool as ‘Leeds versus Greeds.’

While many agree with and appreciate Neville’s sentiments and apparent sincerity in his anguish, that doesn’t mean that he wasn’t devoid of some harsh words himself, if his Twitter thread on the subject is anything to go by. Some responders took the time to remind him that by working for a company such as Sky Sports, that he too is—be it directly or indirectly—part of the problem.

This derives from the emotions still held by many older fans that the B-Sky-B takeover of the newly-formed FA Premier League in 1992 paved the way for the hike in matchday ticket-prices as well as making the game much more expensive to even watch on subscription television. As recently as the start of the 2020-21 campaign, the broadcaster came in for heavy criticism when they tried to implement a £14.95 charge on existing customers to watch the Saturday evening kick-offs. Due to mass refusals and boycotts amongst fans who couldn’t attend the matches, that plan was quickly dropped. Sky have claimed they simply needed to recount the revenue they spent on showing games during ‘Project Restart’ at the end of last season.

While Neville refused to hold back on his condemnation of the ‘Big Six’—a term largely invented by Sky themselves—he was surprisingly critical of his own club, Manchester United, in the process. It was most unlike him, seeing as he usually can’t go more than five minutes without proclaiming his unconditional love for them from whatever soapbox he can find.

Dreams Tossed and Blown?
On the Monday, however, his tweets suggested that he’d reverted back to his more familiar style of slating blame on Liverpool FC at any opportunity. Perhaps he slept off his anger the night before or maybe he got a phone call from his former employers who told him to settle down, we’ll never know. It’ll be interesting to see what his take is later this evening anyway.

Having said that, Neville is not wrong to criticise Liverpool—or any other club—at this moment in time. Their owners, the Fenway Sports Group, have done great things for the club. Culminating in both a Champions League and Premier League title success in 2019 and 2020 respectively. They do, nonetheless, seem to have a track record of acting first and apologising later. And even with the impressive collection of trophies they’ve brought to the club, fans have let them know.

In February 2016, the club made plans to charge a minimum of £77 for a ticket and in a staggering retort, 10,000 fans walked out of their home stadium—poignantly in the 77th minute—to prove a point. Similarly, last year, FSG administered a government furlough scheme on their staff and had it not been for the fans’ disapproval, the scheme would have gone through.

This time though, things seem to have gone too far. The small, but notable, protest on Merseyside about this proposed league signifies that the supporters have been cut too deep by this latest venture by the owners, especially for a club who supposedly pride themselves on social responsibility and community—typified by the You’ll Never Walk Alone anthem— but even if this Super League fails, the scars will still be visible for a while yet.

The Anfield Wrap posted not one, but two, highly-charged and disgruntled podcasts through their streams. Not unlike Gary Neville, they didn’t hold back on condemning their club’s hierarchy, but unlike the former United man, they haven’t taken to pointing the finger at individual clubs just yet.

I could go on and on about the exploits at Arsenal or Chelsea or Spurs—who sacked Jose Mourinho too—or Manchester City or the Italian and Spanish clubs, but really, what’s the point?  It’s one of those times—rare as they are—that no fans of the top clubs have any bragging rights over anyone else. They are all guilty. Sure, the owners will say that a Super League will bring great revenue and financial stability to each club overtime, but that’s the type of talk that businesspeople drool over. What good is that to the everyday fan who’ll get outpriced at the turnstile?  Or can no longer afford to bring his kids to see their heroes in action?

Money’s great but it’s not everything and it certainly can’t buy you love.