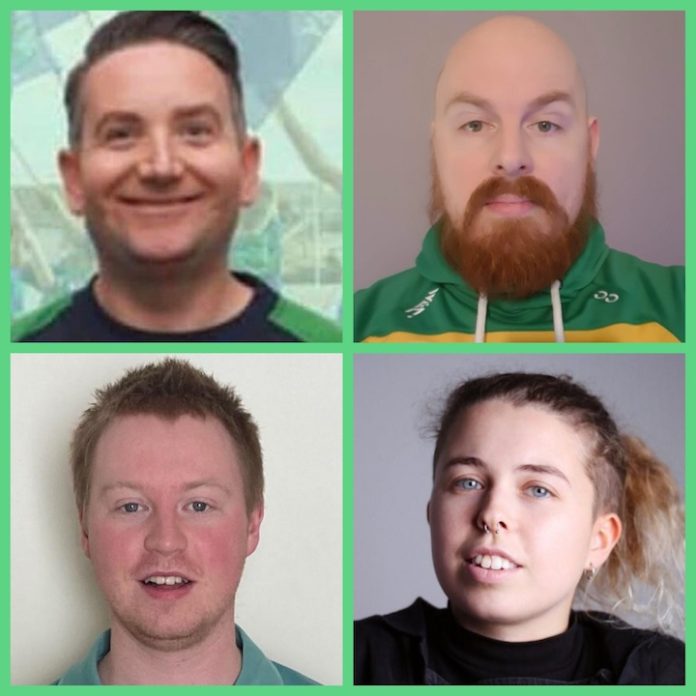 WITH some key events coming up in 2021 and 2022 the PRO team for Scotland GAA has expanded. There is now a new four-person team (above) dedicated to the promotion and expansion of Scotland GAA. They will be working on projects associated with the Development of Pearse Park facilities and cultural centre, the 125th anniversary of Scotland GAA, the 2022 Provincial Convention, and various fixtures, results and promotion of Gaelic games and culture throughout Scotland. Read a little bit more about them below.

Aiden Curran (Glasgow Gaels)
Why did you get involved?
I have been involved with Gaelic sports since I was child both from a playing and coaching perspective and also as a fan and so wanted to contribute to the continued development of the sports in Scotland.”

What project/development are you excited about in Scotland GAA?
The 125-year anniversary is an amazing milestone and is something that I am excited to be involved with. Also increasing the profile of the Scottish GAA social media platforms, in order to reach a wider audience, making them aware of these fantastic sports and in return hopefully assisting the clubs with gaining new members

Christopher Coll (Tír Conaill Harps)
Why did you get involved?
I’ve being working with the PRO team at Tír Conaill Harps for a couple of years now, helping out with the creative design aspect of things. It’s been really enjoyable and has been a huge learning curve for me and to see the impact it has in terms of developing the club’s image on social media. It has been very pleasing. So, when the position became available to join the Scotland GAA PRO setup I jumped at the chance. There are a lot of positive things happening within Scotland GAA at the moment, so to be able to join in on that journey and try and help promote Scotland GAA was a great opportunity for myself and hopefully I can use my skills to make a positive impact for the organisation.

What project/development are you excited about in Scotland GAA?
This year will mark the 125th anniversary of the formation of Scotland GAA. It’s amazing to think it’s been going that long and it something to be very proud of. This is of course something we are looking to mark with many events throughout the year being planned. Obviously with the Covid-19 restrictions trying to set anything in stone is quite hard at the moment, but the team will be sure to have something in place to celebrate this great milestone.

Kieran Kane (Pearse Park Development Committee)
Why did you get involved?
A few years ago, I started getting really into watching Gaelic Football and, after discovering there was a Scotland team, I started following their results on Twitter. I attended a Juniors game between Scotland and Kerry at Clydebank and really enjoyed the experience! I then decided to start a Twitter account to try and promote GAA in Scotland as well as lower league football! Off the back of this, myself and my colleague Matt attended the Scotland GAA awards nights in Edinburgh. We got involved in the Pearse Park Redevelopment Project off the back of this night! I am now excited to be part of the Public Relations Team to continue to do my part for the promotion and growth of the games in Scotland!

What project/development are you excited about in Scotland GAA?
I am really excited to see the completion of Pearse Park, as this was the project that got me involved with the GAA proper. This is an exciting project because it will bring multiple sports together and bolster the local economy. To be involved in a project at the planning stage, there is real anticipation and excitement and we look forward to the completion of this project and see the impact that this will have to not just GAA but also the associated sports!

Emer Brennan (Glasgow Gaels)
Why did you get involved?
As the Ladies PRO for Glasgow Gaels, it’s been really enjoyable to do design work for the club. Seeing all of the hard work and dedication that committee members put into GAA has been incredibly rewarding and made me keen to get involved with the Scotland GAA PRO team too.

What project/development are you excited about in Scotland GAA?
I think being involved in the development of Pearse Park is an amazing opportunity. It’s going to have a hugely positive impact on the different sports there and the local community and I can’t wait to see it come to life.

Jenn Treacey is the Secretary of Scotland GAA