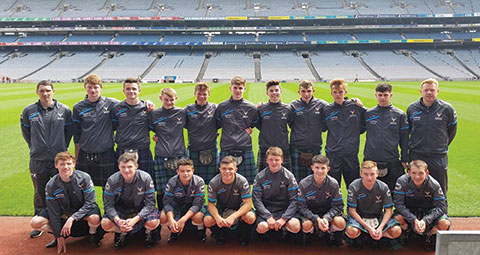 SCOTLAND’S U17 Shinty squad have recently returned after a successful tour in Ireland during which they continued to develop the cultural and sporting links between the two nations.

The four-day visit saw the Scotland side record victories over both Waterford and Dublin U17s, as well as the chance to train at some of the GAA’s first class facilities and even enjoy an inspirational tour of Croke Park (above).

Captain Iain Robinson from Newtonmore was the Scots’ top scorer with 13 points (4 goals and a point over the bar), while Kingussie’s Ruaridh Anderson notched 11 points (3-2) and Skye Camanachd’s James Pringle grabbed 8 points (2-2).

The annual meeting with Dublin U17 was switched from Parnell Park to one of the GAA’s flagship facilities. Scotland’s annual match with Dublin at this age-level is always an intriguing affair, and this year it took place in the setting of the GAA National Games Development Centre.

Taking advantage of an immaculate surface, and cheered on by a number of parents who had flown in for the occasion, the Scots once again put on a show, running out (9-3) 30-11 (1-8) winners, though the game was closer than the final score suggests.

Following a successful tour, the young Scots hope that the chance to use some of the fantastic facilities and show their talents against some well-drilled opponents will stand them in good stead, and are looking forward to the opportunity to develop their relationship with Ireland’s best young hurlers.