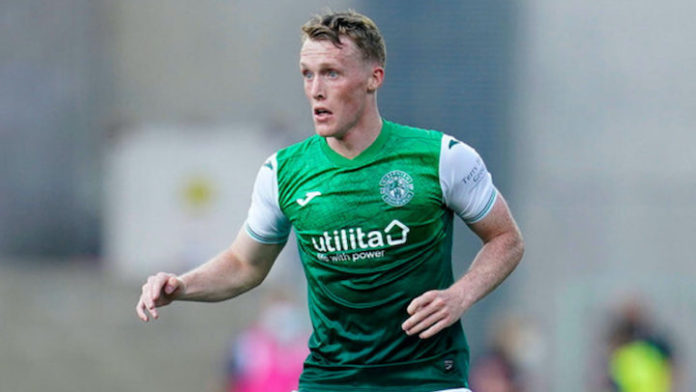 A 22 YEAR-old Irish midfielder has been at the heart of almost everything good that fans have seen from Hibernian this season. Jake Doyle- Hayes (right), from County Cavan, has impressed fans and punters alike with his
fantastic and solid midfield performances, including the Hibees’ 3-1 demolition of Rangers at Hampden in the League Cup semi-final.

Jake was once tipped to be Irish football’s next big thing by none other than Roy Keane himself. Jake—like most talented young Irish players—was whisked off to England as a teenager to join Aston Villa’s youth set-up, after being spotted while playing for Cavan’s regional side on the Emerald Isle. His time at Villa saw him go out on loan twice, playing six matches for Cambridge United and then 30 games for Cheltenham Town, where he scored one goal. A successful spell at St Mirren followed before former manager, Jack Ross, lured him to Easter Road in 2021.

Jake follows in the footsteps of other great Irish players to have worn Hibernian’s green in recent decades, guys like Michael O’Neill, Anthony Stokes, Ivan Sproule and Liam Miller. The player has also played for Ireland at multiple age-levels up to under-21 and will surely be on Stephen Kenny’s radar for the full international squad by now.

Down The Slope is a popular Hibs fan podcast put together by passionate Hibbies Greig Lumsden, Liam Fogarty, Harry McArthur and Euan Wilson. The lads interviewed Jake Doyle Hayes recently and this is what the talented Irishman had to say. You can find Down The Slope wherever you get your podcasts from.

So, Jake, who is the best player that you’ve ever played alongside, and why?
“There’s quite a few, to be honest. It’s hard to pick just one. I think I would have to say Jack Grealish at Aston Villa. He’s an unbelievable talent. I also met John McGinn there—he arrived just before I made one of my loan moves. We stayed in touch and when I joined Hibs he sent me a message saying good luck at Easter Road.”

What was it like growing up in Ireland playing football as a youngster?
“My earliest memory of playing football is of kickarounds on a little patch of green beside my house, with local lads and friends. My Da soon organised us into a little football team and we had great fun playing there. It wasn’t too serious it was great fun.

Back then, football wasn’t the main sport us youngsters played, that sport was GAA. GAA is massive in Ireland but football was just beginning to get more popular after so many lads had did well after going over to England and Scotland. Football is much more popular over there now than it was and that’s great to see.

Where I’m from is very rural—everybody knows everybody. Usually, to get spotted by an English scout you really have to go and play in Dublin. I wasn’t too fussed about that—I was happy just playing locally with my pals but luckily I got scouted in a local tournament. I hadn’t been looking for that, I was spotted and it just happened but I’m glad it did. I was delighted to get the chance to go to Aston Villa.”

Which team did you support as a boy?
I supported Liverpool, because that’s who my Da supported. He took me to a Champions League match at Anfield and I won’t forget that, hearing the singing under the lights in the stadium. I loved it.

How did your move to Aston Villa come about?
I was playing for my local team in the Galway Cup, that’s a big youth tournament that attracts a lot of scouts from big clubs. I went over to Villa for trials while I was still at school. I won’t lie, I wasn’t very fussed about missing some school to play football!

Birmingham is a huge city, not what I’m used to at all and Villa is a massive club, I was delighted to be there. I actually had trials at other clubs in England, too, but Roy Keane was at Villa when I was over. To sit and talk to an Irish legend like Roy Keane was amazing. Roy was the reason I chose Villa, he told me what the club was all about but he didn’t really need to sell the move to me—I was keen already. At the time, Villa had an excellent success rate in bringing through young players and I thought that I would get a fair chance there. It’s a great club and they did a lot to help me settle in. I really enjoyed my time there.

I went out on loan twice, to Cambridge United and to Cheltenham Town. I only played a few times for Cambridge because of injuries but I played more for Cheltenham, where we were unlucky in the promotion play-offs. Those two loan spells showed me how different football is in the lower leagues, different stadiums and facilities. I never took anything for granted and learned a lot.

When I returned to Villa I knew that I wasn’t going to get another contract. That was tough to take but I decided to keep working hard and not to give up. That’s when St Mirren came in for me. I was grateful to them for having faith in me and I think I did well at St Mirren in 2020/21. Season 2020/21 was a bit weird for all of us as we had to play in front of no fans.

What about your move to Hibs?
My first encounter with Hibs came when I was a St Mirren player. Hibs had such a good team. I loved their style and thought to myself that I’d love to play for that side. I love to watch Joe Newell play and Martin Boyle was also a player I admired. I was delighted when Hibs came in for me, they are a huge club and I’m determined to do my best here. Other clubs were interested in me but I just wanted to sign for Hibs. I was impressed by the training facilities but that’s not why I joined Hibs. I joined because I liked Jack Ross’ vision for the club and because it was such a huge opportunity for me. I’m delighted to be a Hibee.

You were introduced to the Hibs fans as a combative defensive midfielder when you signed. Are you?
I wasn’t disappointed to have that label but there’s definitely more to my game. At Cheltenham Town I played as a more box-to-box midfielder. I’m happy to play wherever the manager wants me to, be that as a CDM or more forward chipping in with goals and assists.

How was your first experience of European football with Hibs?
It was amazing. For the Rijeka game in Croatia they had a full stand of loud ultras behind the goals. It was a surreal atmosphere. Of course we had no fans there, because of Covid-19 restrictions. Even then, we had them on the ropes in the match until we unfortunately went a man down. We were disappointed to go out but hopefully we can qualify for Europe again this season. The atmosphere in the home match against Santa Coloma was amazing. I was delighted to be a part of it.

Who would be your number one choice at Hibs to go for a pint with?
Ryan Porteous, he’s great craic.

Who is the worst dressed player at Easter Road?
Erm, ha ha. There’s quite a few. Maybe Josh Campbell. Or maybe Scott Allan. Haha. Doidgey is probably the best dressed.

Which player has the best taste in music?
Again, that’s Porto. He chooses what we listen to. He’s the man! We listen to a broad range of music.

Who would be your pub quiz partner?
Drey Wright.

If Hibernian had its own TV show, who would be its lead character?
That would have to be Martin Boyle, he’s a real live-wire. I’ve never met anyone like him.

If you were playing in goal, whose shot would you jump out of the way of? Who has the hardest shot?
Definitely not myself or Joe Newell, I’d probably say Kevin Nisbet. Jamie Gullane would also be in with a shout.

Thanks again to the guys at Down The Slope.