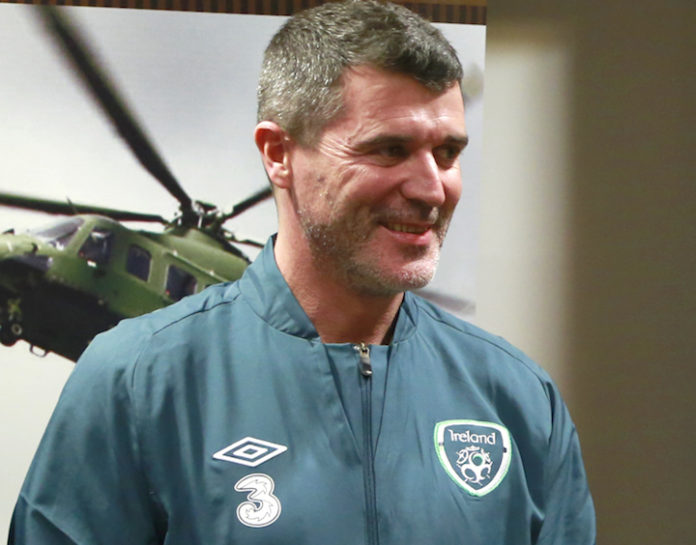 LOVE him or loathe him—and believe me, as an Ireland fan who still harbours the thoughts of ‘what could’ve been’ after he departed Saipan, I have feelings of both—there’s still no denying that this country has an unusual obsession with a now 50-year old, Roy Maurice Keane.

As a player, the Corkman had a reputation of holding a fiery temper. A man whose leadership qualities inspired a ‘do or die’ attitude amongst his teammates and management alike. He was adored by his fans and feared by his opponents.

In his younger days, as a midfielder with Nottingham Forest and Manchester United, his energy allowed him to have more of an attacking role. This often saw him being actively involved in the goalscoring process. In his latter years, some wear and tear had set in, but he remained as ferocious as ever in his new role as a more defensive midfielder.

In a technical sense, Keane wasn’t the most graceful of players. He wasn’t one for mazy dribbles or 30-yard screamers. His lack of height meant winning aerial battles or scoring headers were also something of a rarity, but one cannot deny his natural ability to break up opposition attacks as well as how talented he was at driving his own team forward against the best of English and European opposition.

He played a key role in United’s rejuvenation in the 1990s. He was a captain and a leader and his winner-takes-all mindset and sentiment was shared by his then manager, Sir Alex Ferguson, making them a manager-captain combination that could steer the team to success at an almost unstoppable rate.

All good things come to an end, however. Keane and Ferguson had a very public fallout in 2005, thus ending the Irishman’s tenure with the Red Devils, and the two couldn’t resist adding extra pot-shots at each other in their autobiographies and media interviews for a long time afterwards.

Nowadays, after a few fairly calamitous stints as a manager himself, Keane has since become something that he famously wrote we’d all be allowed to shoot him for if he ever became one—a television pundit. And it seems that no matter what he says in the Sky Sports studio, he becomes instant clickbait. Mainly from Irish people.

Keane’s fallout with Mick McCarthy at the 2002 World Cup training camp caused an unprecedented media sensation in this country. In newsrooms, it was even held in the same regard of  ‘newsworthiness’ as the death of Princess Diana or the 9/11 attacks on the United States. Only this time, people were taking sides in the argument and this caused an unusual civil war like tension in the country.

Even though there was only a primitive form of social media in those days, Conor O’Callaghan’s book Red Mist: Roy Keane and the World Cup Blues—later revamped as a talking heads documentary—perfectly charts how the man from Mayfield, in County Cork, became a talking point in almost every aspect of Irish society from then on.

Nowadays, almost two decades on, that ripple effect still seems to resonate and it seems that no matter what Keane says, he’ll be trending on social media just minutes later.

This past few year alone, his claims that: “DeGea shouldn’t be allowed on the United bus after that.” “Villa celebrating avoiding relegation? It’s not like they won something,” “Liverpool have been bad champions” and “Spurs are a tough watch,” have gathered an unimaginably high number of likes, views and shares across the social platforms.

Some fans feel that such statements encapsulate that winning spirit he showed in his days at United. Others feel that it’s all part of a caricature which Keane has invented for himself since starting his television work. Both sides of the fence in this argument hold water, to be fair.

It shouldn’t be overlooked though that Roy Keane, who often gets depicted as this monstrous, hard-tackling and obsessive machine, is only a half-truth.

Since he hung up the boots in 2006, not only does he do great work for guide-dogs charities, he’s shown himself to be witty and light-hearted in the television studio, he’s started his own show with ‘football’s Mr Nice Guy’ Micah Richards, and he’s recently become an instagrammer himself. Monster? Do me a favour!

On the whole, nobody can ever deny his talent as a player and it does feel that he is box-office entertainment when working as a pundit. Don’t forget though that a lot of these so-called ‘rants’ of his are often blown out of proportion as clickbait during a time when Sky Sports no longer rule the roost in football broadcasting.

Johnny was the first guest on our Irish Voices podcast, during which he spoke to us from his home in Donegal about his background, his move to Scotland, his passion for writing, his love of football and of course GAA—in particular his time spent with Dunedin Connollys in Edinburgh—and much more. Listen here: https://anchor.fm/theirishvoice/episodes/Dn-na-nGall-to-Dn-ideann-and-back-again-e14f42g